Back in September 2018 I posted on Vintage Wargaming about the acquisition of some Rose figures from Peter Goldsbrough's collection of 20mm Napoleonics. In addition to these I had quite a large number of unpainted figures from a previous purchase, which I intended to combine in a project I thought I would document on line. The Goldsbrough figures included a lot of conversions, some of them very interesting, and which required a degree of repair and refurbishment.

That original Vintage Wargaming post can be found here.

For various reasons all the fun and excitement were soon drained out of the project and I put it aside for eight or nine months, and even thought seriously of throwing all the figures away. However, then after finishing various other things I decided to have a go at seeing it to completion. This meant a further two or three months sticking at it and grinding out about 20 battalions and 10 or 12 guns and crews. While it wasn't very exciting while it was going on it was a good feeling of achievement to get it completed. It also meant I still haven't had to face up to painting hundreds of Hinton Hunt French and British line infantry figures.

I have always liked the stylised nature of the Rose infantry, all of which are in two poses, marching and advancing.They are almost semi flat or demi-ronde, and I had always thought they would look very good en masse. I also changed my normal basing standard (20mm x 20mm for foot) to two ranks of two figures each on a 30 mm frontage with a 40 mm depth to fit the style of the figures and was very pleased with the result. 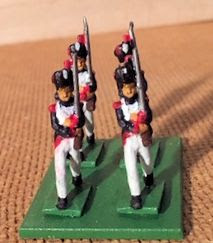 This photo would have illustrated this point better if I had stuck the figures a bit straighter on the base.

Having acquired a large number of Rose officers of various types, but all in the same pose, waving their sword in a right arm that looked just a little too long, I got quite fond of using them with Les Higgins units, to give a slightly more animated command option than the LH bloke standing on a football and pointing. 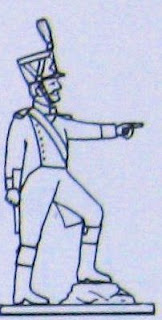 The Rose Napoleonics range was small and doesn't seem to have expanded hence the need for conversions for anyone with ambitions beyond this original list. This might be to add more detail, to get the troop type you wanted, They were first issued in 1963-4,  therefore a little before the Hinton Hunt 20mm range, which took the alternative route of being as large and comprehensive as possible. 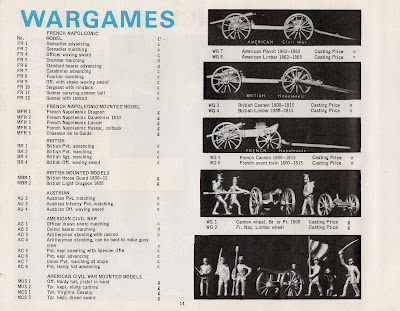 I had also come across the DBN Napoleonic Rules which operate at a grand tactical level and are really designed for 15mm figures. In the couple of games I played  I found them really well thought out and clearly thoroughly play tested. Although this isn't the level I would choose to do moist of my Napoleonic wargaming I am now wondering whether the Rose armies might provide an option for DBN.

The Rose figures are a bit of a sideline and curiosity really - I'm not sure for example how they might work with my other 20mm figures, like Hinton Hunts and Alberken - so thinking of a particular role for them is a good thing and very welcome after the time and work put into them.

So in the end I think a useful project to create some unusual armies and I'm glad I stuck with it.


Posted by Vintage Wargaming at 22:00

This has been a really impressive series of posts - do you think you can keep it up in 2020? Besides if you can't face painting hundreds of HH figures you could always sell a few I'm just starting with HH and living on scraps at present.

I need to take stock of all the blogs as I haven't really been active in any of them for two or three years. For example I have just noticed that I don't have the British Napoleonic Infantry listed on the Lone S Ranger, and at some point I really should add text to the captions on my Interwar Tank Development blog.

re selling some Hinton Hunts - well, you never know.

Casting and painting a Rose Napoleonic army or two is one of my 'to do' things that will probably never happen...

If you ever do I’d be in the market for some more French Line Infantry- and British Light Dragoon’s In Tarleton..

Let me know what you want and I'll see what I can do.

Likewise Rob - should be able to d that second French cannon now I've got the melting pot working. May be a while though - got lots of things to do for myself.

These ae a stunning series of posts, VW. I had only half a dozen Rose British infantry, which I gave away to someone who needed them more than me. They were cracking wee figures though and I'm ever slightly regretful about this.

We need to your armies on manoeuvres!
Happy New Year
WM