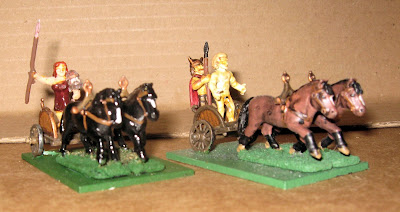 An update on recent new Lamming Roman and Britons acquisitions.

As mentioned in a previous post I had been looking for some British chariots. Once I had found two (from a slightly unexpected eBay source) I had a hankering for Boudicca's chariot. A while later I picked up another four, including Boudicca (that's her on the left). I think I need to add reins to finish these off. I think six is enough now. 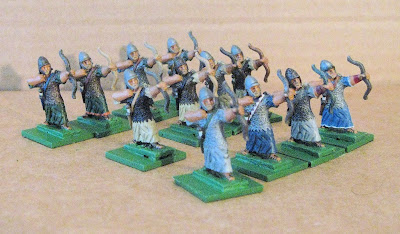 I'd also had a successful appeal a while ago for some Eastern archers and thought I had enough but when these turned up I couldn't avoid picking them up. Already painted, they only needed rebasing 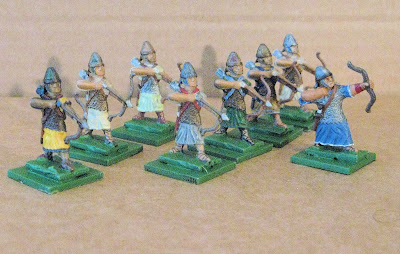 They came with these Garrison Roman Archers, which are very compatible and add variety with a different pose - a very welcome addition.

I also picked up from the same seller this small group of Roman Auxiliaries, again very welcome.

Finally these Ancient Britons had been painted for a long time, they just needed the addition of wire spears. I am not sure how historical the horned helmets are (I know they are now thought not appropriate for Vikings, but I don't know about earlier Ancient Britons).

So I don't have any remaining gaps in these forces, with loads of Roman and Celtic cavalry. Of course something interesting might still crop up...
Posted by Vintage Wargaming at 20:59

Are you interested in Lamming Egyptians? I have about ten chariots,forty archers,sixty spear men and seven sea people. They are all painted and Dbm based. I got them some time ago. They have sat in box files and need to get out more. I am not looking for a huge profit ,can’t recall what l paid for them, but want them to go to an appreciative home.
Alan

Hi Alan - I don’t do ancients - the Romans are a blip, from when I first saw them in the 1970s. If anyone else is interested they can leave a comment here and I’ll put them in touch with you