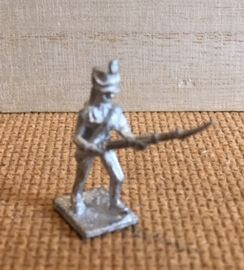 This figure was included in a recently arrived bunch of figures from eBay which amongst other things had around 30 Lamming first series Napoleonics, infantry, gunners, and cavalry. While not quite the same style as those first series Lammings, and also being slightly smaller, it shares some unmistakable Lamming DNA.

As I knew the Hinton Spieler was interested in this figure (and has posted a photograph from Charles Grant's Napoleonic Wargaming of part of Peter Gilder's collection including a unit of these), I sent him a copy of the picture above and have had an email discussion with him about it. He will be posting his views there, but I can't yet agree that they demonstrate a third, "intermediate", Lamming Napoleonic range, either before or after the first series.

It is well documented that Bill Lamming remodelled the figures in 1974/5 into a chunkier, heroic 25mm format, dropping eight French infantry codes at the same time. However there is no suggestion anywhere else of a third range - this would only have worked if they were forerunners of the original range. and this is entirely possible but is only based on this particular figure (although the Spieler has also been tipped off of pictures of another in similar style on eBay).

I would want to see at least five or six different figures before accepting there was such a range. Given the longstanding interest there was in Bill Lamming's short lived Sven Years War range and the energy which went into looking for information on it (see here) I don't think a whole range could have disappeared without anyone noticing or mentioning it.

So I think perhaps these were one or two early figures which might have been resculpted as the first range built up. The figures themselves look like Alberken or Minifigs 20mm figures which have had Lamming faces or heads transplanted onto them. They also have an attempt at the scratched grass effect on the tops of their bases. I think they may have been home cast although the Spieler doubts this. Peter Gilder certainly had a record of using others' figures in designing his, and it is interesting that they have emerged in the context of his collection - so he may have made them himself for his own use. 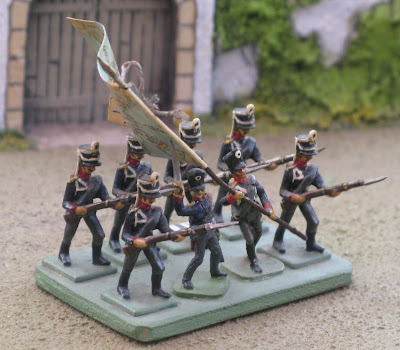 Interestingly I have another photograph (the one above) which is certainly made up of the same figure and I think actually are the same figures and unit as the one in the photograph from  Grant's Napoleonic Wargaming in the link above.

It came from the late Mike Ingham, who took the Wargames Holiday Centre over from Peter Gilder, and who asked me to help to identify the manufacturers of the figures from PG's original 20mm collection at the WHC which he wanted to sell - this was later replaced by the collection of Connoisseur and other figures which will be more familiar to some of a particular vintage.

The basing is the same, the flag looks the same, also the Hinton Hunt officer and converted ensign (below).

We may never know anything more for sure, but it will be interesting to see if anyone else has any of these figures, or any light to shed on the matter. I know Matthew at the Hinton Spieler has some more, relevant photos so I am looking forward to how this discussion might develop.

Posted by Vintage Wargaming at 16:25

Hi VW
I've just posted some samples on the Hinton Speieler. They really are the most curious things - quite the smallest Lammings I've come across!

Im with you on this one. Peter Gilder clearly loved tinkerng/plagiarising other peoples sculpts, nothing wrong with that. It was only when he started knocking them out as his own did he fall foul of copyright. But these 20mm Prussians for his own collection sound about right, although we will never know. It doesnt matter really because they are still lovely figures in their own right.

Thanks to both of you for your comments

Peter Gilder was not my favourite person...

In case there is any doubt, these are definitely Lamming. I was buying figures in Yorkshire in the early 70s, and Lamming was what the local shop sold. I do recall these figures well. They were much less impressive that the other Lammings. They were weedier than the French and British Line and the Prussian Guards. The worst comparison though was the Lamming Landwehr who were really quite chunky and made these Line regulars look terrible. I ended up using French in greatcoats, slightly modified, for most Prussian line/reserve regiments.